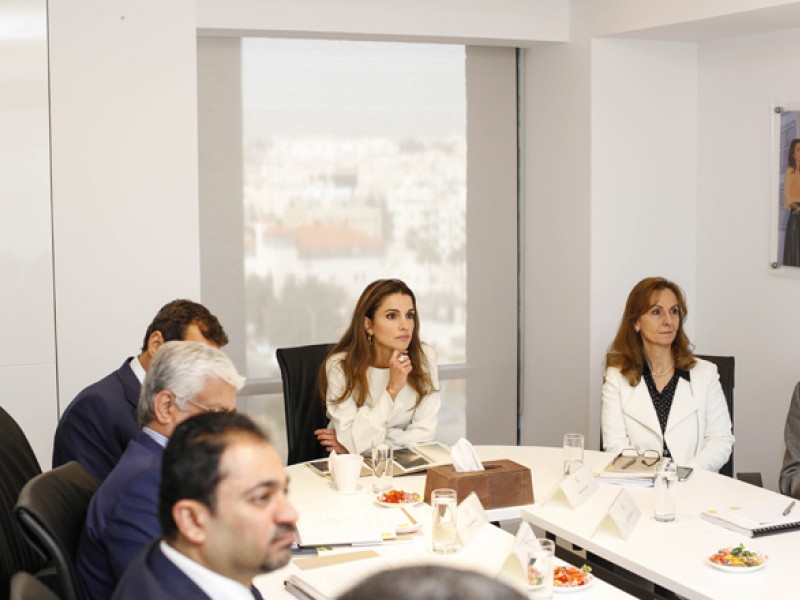 AMMAN — Her Majesty Queen Rania on Tuesday chaired the Queen Rania Foundation for Education and Development (QRF) board meeting and listened to a briefing on the foundation’s programmes and future plans.

The meeting focused on a potential early childhood development project, which QRF will discuss with the ministries of education and social development, according to a statement from Her Majesty’s office.

The programme aims to improve the level of services provided to children and infants in nurseries at public schools and organisations, as well as build a number of partnerships with institutes that work in the same field to benefit from their experiences.

During the meeting, Queen Rania and attendees also discussed the latest developments of Edraak, which is a massive open online course platform.

Launched by Her Majesty in May this year, Edraak has attracted more than 110,000 registered users, 40 per cent of them females, the statement said.

Edraak also seeks to provide training courses that meet learners’ needs and the demands of the current job market; therefore, when designing their courses, QRF depends largely on the feedback received from the public through its Facebook page, which has about half a million followers.

In addition, Edraak is developing a new set of courses, including an English language course, and building new partnerships to reach as many beneficiaries as possible from the Arab world.

QRF aims to improve learning opportunities for children and young people in Jordan so that they are equipped with the knowledge, skills and values that will allow them to excel in a fast-paced and increasingly competitive world, the statement said.

It aims to push the boundaries of education in Jordan and across the region, within and beyond the classroom, and facilitate a transformation in educational quality and learning outcomes.