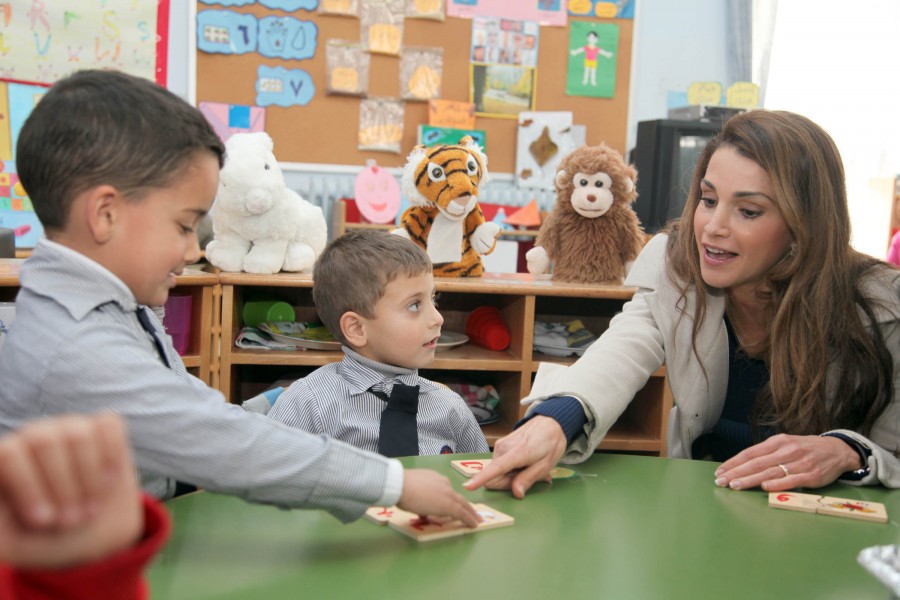 AMMAN — August 31 marked the birthday of Her Majesty Queen Rania, who has been working towards improving the quality of education in the Kingdom and around the world, in line with His Majesty King Abdullah's vision for a modern Jordan.Over the past years, she has also focused on empowering local communities across the country.

In recognition of her efforts in the education and development fields, Queen Rania was selected this summer by UN Secretary General Ban Ki-moon as one of 26 members of his high-level advisory panel on the Post-2015 Development Agenda, to advise on the global development agenda beyond 2015, the target date for the Millennium Development Goals.As UNICEF’s Eminent Global Advocate for Children and Honorary Chairperson of UN Girls’ Education Initiative, Queen Rania participated in several influential conferences like the Clinton Global Initiative and the World Economic Forum (WEF), to promote the rights of millions of children to attend school, especially girls.In 2009, Her Majesty also launched and was named Co-Founder and Global Co-Chair for 1GOAL, a campaign to promote global education in partnership with FIFA, the World Cup South Africa 2010 and the Global Campaign for Education.

Her Majesty is also a board member of the UN Foundation and a supporter of their Girl Up campaign, which helps give adolescent girls in developing countries access to education and opportunity by empowering American girls to help their peers abroad.Queen Rania continuously uses her high profile online to promote Jordan as a tourist destination, and to support Jordanian initiatives and volunteers. More recently, Her Majesty expressed her support to the Jordanian Olympic team. “Olympian hopes for the Olympic games! We're proud of you”, tweeted Her Majesty, addressing the Jordanian athletes.Labelled by many as “the online Queen”, Her Majesty has more than 2.2 million followers on Twitter www.twitter.com/queenrania, ranking her as one of the most followed world personalities and leaders according to a recent study by Burson-Marsteller, "Twiplomacy". In addition to her own website, Queen Rania has more than a million fans on her Facebook page www.facebook.com/QueenRania, as well as a very successful Youtube channel www.youtube.com/queenrania, where she works to promote issues such as breaking stereotypes and cross cultural dialogue.Quality, access, excellence and innovation in educationIn Jordan, Her Majesty also established a number of affiliations that work in the field of education.

In 2008, she launched Madrasati (“my school” in Arabic), an initiative that aims at rehabilitating and refurbishing 500 public schools in urgent need of renovation across the Kingdom, thus providing students with a better school environment combined with increased local community involvement."Madrasati is based on the simple idea that every citizen has a stake in our children’s education," Her Majesty Queen Rania has said in an op-ed she wrote for the Economist.Since the launch, Madrasati has reached more than 400 schools affecting the lives of 135,000 students around the country. Over the past few years, this public-private initiative has brought together 90 private sector companies, 10 NGOs and five governmental departments."We need an educational awakening, a skills-based renaissance to reform our education system and guarantee real reform and development.

Education is the first requirement for development,” Her Majesty said in May 2012 at the launch of Phase V of Madrasati Initiative, which covers an additional 100 schools in the northern governorate of Irbid.The Queen also supports the work of the Jordan Education Initiative (JEI), which was launched by King Abdullah in partnership with the WEF in 2003. JEI strives to spur education reform and drive innovation in the industry through equipping classrooms with computer technology and cutting-edge curricula. JEI won the 2009 UNESCO King Hamad Bin Isa Al Khalifa Prize for the Use of ICT in Education, and its model has been exported to and adapted in several countries.Aiming to provide students with the opportunity to learn about the world outside the classroom, Queen Rania established the Children's Museum-Jordan (CMJ) in 2007, which includes more than 150 fun and interactive exhibits, and hands-on displays. The CMJ also launched the “A Museum for All” initiative that aims to remove any barriers that may stand in the way of a child’s visit. Through partnerships with the ministries of education and social development, the museum grants free access to public school students and children from lower-income communities and those with special needs. Since its opening, the facility has received 902,636 visitors.In line with Her Majesty's beliefs that teachers are one of the core pillars of the educational system, she lunched the Queen Rania Teachers Academy in 2009 to empower teachers, supervisors and principals with the skills, recognition, and support necessary to excel at the classroom and school. Since its establishment, the academy has benefited 5,580 teachers with its various programmes and training courses.In addition, Her Majesty launched two annual awards: the Queen Rania Al Abdullah Award for Excellence in Education in 2005, to set a national standard of excellence in teaching, and to celebrate, encourage and honour those who reach it; and the Queen Rania Al Abdullah Award for Distinguished Principals in 2008.Cherishing orphansAiming to support Jordanian orphans after they reach the age of 18, Her Majesty launched Al Aman Fund for the Future of Orphans in 2006 to provide orphans with the necessary housing, financial support and scholarships to enable them to graduate from post-secondary education institutions."Those who are destined to live without parents should be cherished by all," Queen Rania noted in an op-ed.To date, 1,664 orphans have benefited from the fund’s education schemes, while the number of graduates reached 805, out of which 280 received job opportunities through the fund.

More than 4,500 orphans have benefited from Al Aman Fund’s counselling services and workshops, while 600 students have benefited from the health insurance offered by the fund."Al Aman Fund gave me all the support I needed. I passed the Tawjihi and secured a seat at university. Education is the tool that can help me succeed and overcome challenges in my life and I am so proud of being a university student currently," said one beneficiary.Empowering families and local communities working in the fields of community development and empowerment, and child safety and protection, the Jordan River Foundation (JRF), established by Queen Rania, has reached more than one million beneficiaries across the Kingdom. JRF is committed to helping local communities reach their sustainable, income-generating and developments goals through initiating numerous socio-economic projects and long- term community investments that provide multiple employment opportunities, based on the needs of each area."JRF believes in a holistic approach, investing in communities, focusing on the needs of whole villages, and inspiring locals to take on the mantle of civil society and work towards their own development," Queen Rania has said.Her Majesty also heads the National Council for Family Affairs (NCFA), which contributes to improving the quality of life of all Jordanian families. Launched in 2001, the NCFA acts as an umbrella organisation for two national entities: the National Team for Family Safety and the National Team for Early Childhood Development. The NCFA also designed a 10-year National Plan of Action for Children in 2004, to ensure all children live in an environment that supports their right to protection and development."We must ensure that the family unit continues to be nurtured and preserved, serving as the unshakeable foundation of any healthy and stable society," Queen Rania has noted.Believing that "there is no substitute for health and nutrition in the early years of life", the Queen established the Royal Health Awareness Society (RHAS) in 2005, to raise health awareness and empower Jordanians to embrace healthy lifestyles and behaviours. Last year, 678,910 people benefited from RHAS' programmes.Queen Rania married then Prince Abdullah Bin Al Hussein on June 10, 1993. They have four children: Their Royal Highnesses Crown Prince Hussein, born June 28, 1994; Princess Iman, born September 27, 1996; Princess Salma, born September 26, 2000 and Prince Hashem, born January 30, 2005."I have learned that motherhood is both a teaching and learning process; the things you learn from your children can outnumber the things you teach them," Queen Rania has said.