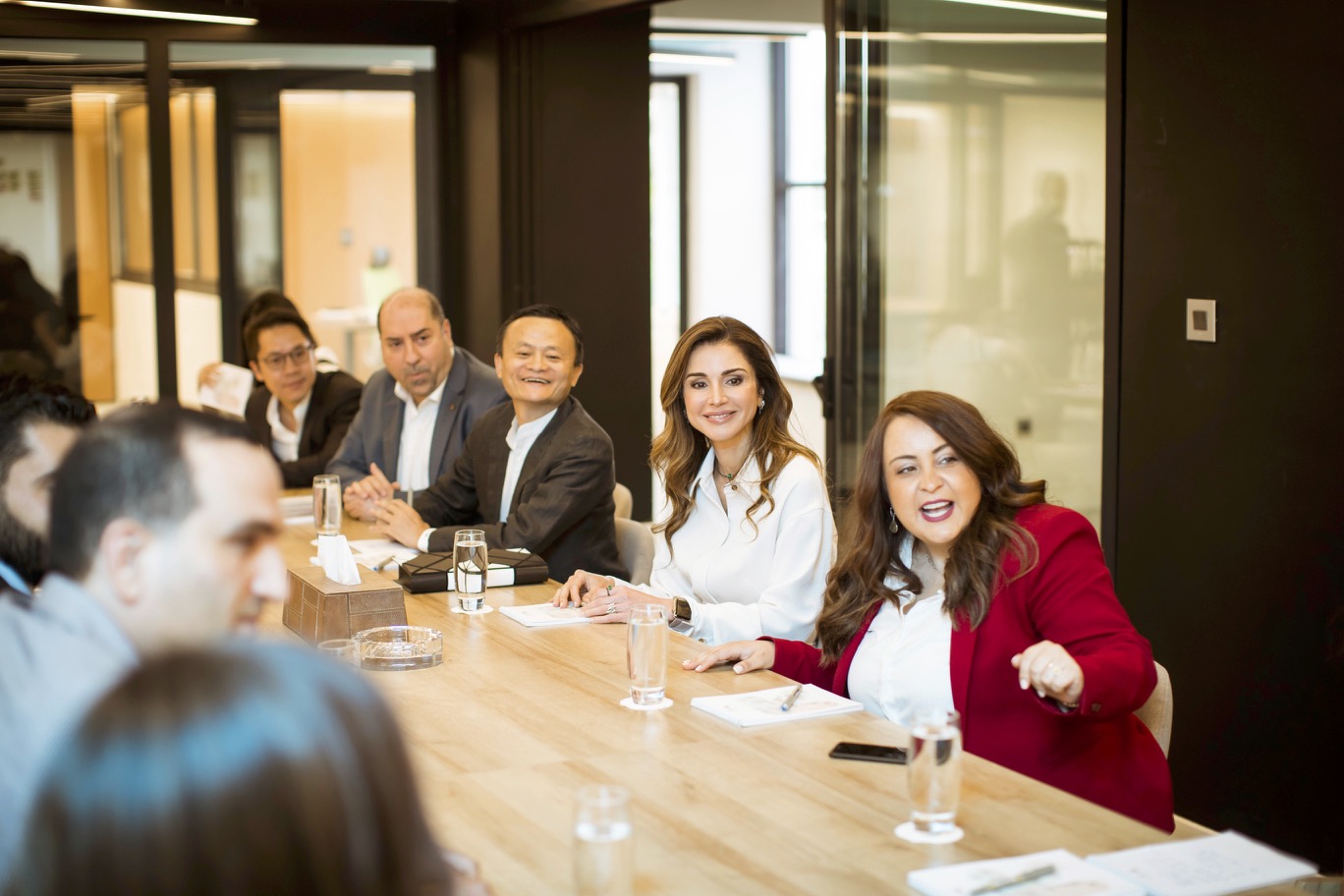 (Office of Her Majesty – Press Department – Amman) - The Jack Ma Foundation (JMF) announced on Monday a first stage grant of three million USD to support the mission of the Queen Rania Foundation for Education and Development (QRF) and its work in education in Jordan, with a particular focus on Edraak, the free online platform for Arabic open educational resources (OERs) and the Queen Rania Teacher Academy (QRTA).

The grant was announced by Lead-founder and Executive Chairman of Alibaba Group, Mr. Jack Ma, during his visit to Edraak’s new offices in Amman on Monday, where he was joined by Her Majesty Queen Rania Al Abdullah.

This step marks the beginning of a fruitful relationship between JMF and QRF, and demonstrates both Ma’s and Queen Rania’s passion for education and the mutual belief in the power of innovative methods and new technology to address global educational challenges.

JMF General Secretary, Ms. Xiuhong Yu, recognized the challenges faced by young women, girls, refugees, and students in Jordan’s rural areas, expressing her hope that the grant will strengthen the foundation’s ability to improve education for these vulnerable groups.

The announcement comes at a pivotal time for the entire Middle East and North Africa (MENA) region, where more than 15 million children are out of school due to armed conflict and displacement, and many lack access to quality education, an issue exacerbated by the region’s refugee crisis.

Education systems in Arab host countries like Jordan, which has taken in large numbers of refugee students, are currently stretched beyond their limits, compromising the quality of education offered to both local and refugee children.

In answer to this critical challenge, the K-12 Edraak platform, an initiative of QRF, was created to harness the power of technology and bring free quality learning opportunities to Arabic-speaking children across the region, whether in or out of school, including those in refugee camps and conflict zones. The platform, which is accessible to more than 100 million children, will offer tools and resources for parents and educators in all major subjects, empowering them to guide children’s learning journey.

QRF CEO, Ms. Haifa Al-Attia, thanked JMF, noting that the grant will provide educational opportunities to learners in Jordan and across the Middle East, both through Edraak and QRTA.

“We are extremely grateful for the generous support of the Jack Ma Foundation, which has once again distinguished itself as an invaluable champion of education across the globe,” she said. “Through this grant, we will continue to not only deliver quality education to young Jordanians, but also to children across the Arab World through our digital platform Edraak.”

At Edraak’s new offices, Her Majesty and Ma were welcomed by Edraak CEO Shireen Yacoub, and were briefed by the company’s team on its most recent work and its plans moving forward.

A group of ten Edraak learners, who have used the Edraak platform for adults, also gave accounts of how the platform has had an impact on their personal and professional lives.

Among the learners were some who joined the meeting virtually from various Arab countries including Syria, Saudi Arabia, and Algeria.

Touring the new offices, the Queen and Ma met with a number of engineers from Google, who were on a visit from the U.S. They also stopped by Edraak’s studio, where school teachers were filming educational content for the K-12 program. The teachers and content creators explained to Ma the need for high quality open educational resources in Arabic, while stressing the potential that Edraak’s new platform has to revamp K-12 education in the region.

Queen Rania also accompanied Ma to the King Hussein Business Park, where he joined a group of 20 Jordanian venture capitalists, incubators, and enablers in a closed meeting to discuss the entrepreneurship ecosystem in Jordan. The meeting was followed by an open interactive Q&A session with 60 Jordanian startups and entrepreneurs.

While in Jordan, Ma also visited the Queen Rania Teachers Academy (QRTA), where CEO Haif Banayyan briefed him on different programs implemented by the academy.

Ma, who taught as an English language teacher for six years and runs several programs on rural education in China through JMF, met with teacher trainees at the academy and discussed the impact that QRTA’s programs have had on their professional development.

Launched in 2009, the QRTA is committed to the vision of Queen Rania to empower educators with skills, recognition, and the support needed for them to excel in the classroom. In partnership with the Ministry of Education, the academy offers training programs for teachers that align with local and regional educational needs, and has so far trained 60,000 teachers across Jordan.

The Queen Rania Foundation, founded by Her Majesty in 2013, aims to be a leading regional resource and incubator for new and innovative ideas and initiatives in education. The Foundation’s main regional initiative, Edraak.org, is the premier online learning platform for adult learners in the region, reaching more than a million Arab learners with free high quality Arabic educational content (since its launch in 2014).

Jack Ma founded the Jack Ma Foundation in 2014 to promote human development in balance with society and the environment.  The mission of the foundation is to support a world of bluer skies, cleaner water, healthier communities, and more open-minded thinking. The Foundation is currently focused on promoting education through four specific programs: Rural Teacher Initiative, Rural Headmasters Initiative, Rural Pre-Service Teacher Initiative, and Rural Boarding School Pilot Project. Over the past three years, the Foundation’s programs have positively impacted over 8,000 rural headmasters, 40,000 rural teachers, and 2 million rural students.