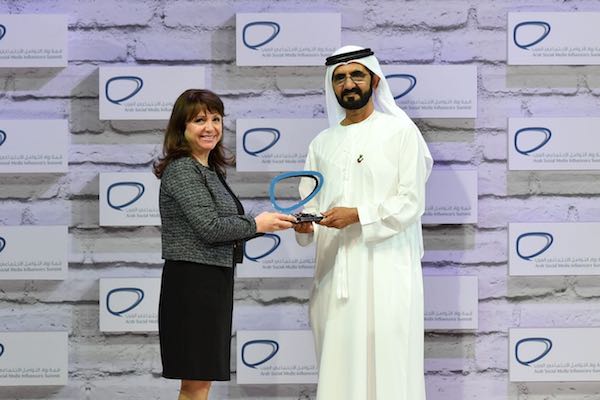 The Queen Rania Foundation for Education and Development (QRF), received the Arab Social Media Influencers Award – ‘Education Category’, awarded by His Highness Sheikh Mohammed bin Rashid, in recognition of the Foundation’s work in the education sector.

The award was received by the Queen Rania Foundation for Education and Development CEO, Haifa Dia Al- Attia, at the Social Media Influencers Summit, on December 13, 2015 at the Dubai World Trade Center. The Summit attracted more than 2500 social media influencers and prominent social media figures from the region and around the world.

Ms. Haifa Dia Al-Attia, CEO of Queen Rania Foundation (QRF), expressed her pride in receiving the Arab Social Media Influencers Award- “Education Category” on behalf of the foundation; and also expressed her gratitude to the Arab Social Media Influencers Summit for its work in supporting and honouring institutions and organizations in the education sector who utilize social media platforms to promote their educational values and outcomes.

The Queen Rania Foundation launched Edraak in May 2014, as part of its mission to ensure that the Arab world is at the forefront of educational innovation.   Since then, Edraak has reached 1,000,000 registered users, with 50 courses released to date, and is keen on providing online courses that meet learners’ needs as well as the demands of the market, offering topics spanning from arts and sciences to education for employment and citizenship. As such, QRF has capitalized on regional Arab talent to leverage technology developed by the Harvard-MIT consortium, edX, to create the first non-profit Arabic MOOC platform.  The platform aims to enrich Arab higher education by offering access to courses taught at the best universities in the world and broadcasting Arab professors and academics as well as professionals to the region offering original Arabic content.

Launched by His Highness Sheikh Mohammed Bin Rashid Al Maktoum, UAE Vice President, Prime Minister and Ruler of Dubai, the Arab Social Media Influencers Summit is the first event of its kind in the region for social media channels influencers. Their purpose is to facilitate a gathering where information, ideas, and culture converge. From education to health to human development, the sessions cover a wide range of positive and constructive topics that are shared across social networking platforms.