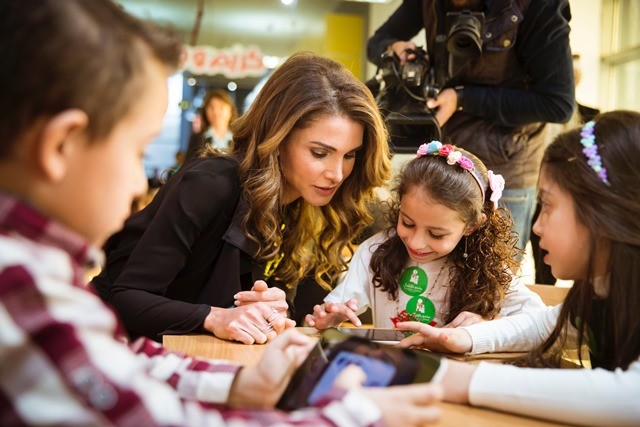 (Office of Her Majesty – Press Department – Amman) - Her Majesty Queen Rania Al Abdullah attended on Monday the official launch of ‘Karim and Jana,’ a free mobile application developed by the Queen Rania Foundation for Education and Development (QRF) to promote early childhood education.

Designed for Arabic-speaking children between the ages of three and six, ‘Karim and Jana’ features five fun and educational games, through which children can develop their mathematical, linguistic, and social skills. The mobile application provides parents with a free learning resource that increases their children’s readiness for school during their formative years.

The launch event took place at the Children’s Museum Jordan (CMJ), where Queen Rania was welcomed by QRF CEO, Haifa Al-Attia, and CMJ Director, Sawsan Dalaq. Her Majesty joined a group of mothers from across Jordan for an awareness session, which emphasized the importance of early childhood education as well as parents’ role in shaping their children’s personality and learning skills.

Research has shown that more than a third of children in Jordan between the ages of three and six have never been taught letters, numbers, or words, and more than a third of mothers in Jordan do not read to children under the age of five. Meanwhile, in comparison with other middle-income countries, Jordanian children’s enrollment rates in kindergartens and nurseries were found to be very low.

After the session, Her Majesty chatted with a group of mothers as their children tried out the application, who explained how technology has made it much easier for them to teach their children from home. The ‘Karim and Jana’ application is designed for children to use alongside their parents, who are encouraged to apply its concepts to real-life activities.

Queen Rania then dropped in on a Training of Trainers (TOT) session, where a team from QRF conducted a training session on the use of the free application for its partners from CMJ and the Zaha Cultural Center.

Her Majesty also stopped by the CMJ library and joined a group of children learning about tourism sites in Jordan through the application.

Through ‘Karim and Jana,’ children can learn to count to 20, identify two- and three-dimensional shapes, understand basic addition and subtraction, and build listening and comprehension skills through stories and songs. The application also includes an ‘Adventure’ game, which uses interactive play principles to take children on a journey across Jordan.

The launch of QRF’s first mobile application comes as part of its support of the National Strategy for Human Resource Development (HRD), which outlines national priorities, including early childhood education and development, for implementation by the Ministries of Education and Social Development, in collaboration with NGOs and the private sector.

Established by Her Majesty in 2013, QRF aims to be a leading regional resource and incubator for new and innovative ideas and initiatives in education. The foundation’s work is focused on identifying gaps and opportunities for developing new education programs, as well as influencing policy and creating transformational change on the ground.

‘Karim and Jana’ is available for free download for Android from Google Play and for iOS from the App Store.